I remember watching Rune Glifberg the Danish skatehero skating on TV once and I think that’s where my fascination first started. It was what all the cool kids were doing so naturally I wanted to try it. I was never really into teamsports like soccer and volleyball. I wanted to do something where I didn’t have to depend on anyone else but myself and I think that’s why skateboarding appealed to me.

Not really, but it was a shitty one for sure. I do remember the graphic as being something with dragons. I thought it was the coolest thing ever.

I grew up at the country. I was the only skater around, and I don’t just mean the only girlskater. I had my dad and grandfather built a little skatepark in the barn on the farm where I lived, so I basically just did my own thing. I had no idea what I was doing I was just having fun. But I quickly got involved with the skate scene in Copenhagen, and started skating in Copenhagen Skatepark and got inspired by the people skating and working there. I pretty much consider Cph Skatepark my second home now.

My hometown is not really a town actually it’s more like a house on a field. I had no neighbors. But the best thing is definitely the nature that surrounds our house. The privilege of stepping outside your house and having a lake on one side and a forest on the other is something I’ve come to understand and appreciate after I’ve moved to the city. The worst thing is probably the same thing. Lakes and woods are not great for skateboarding. 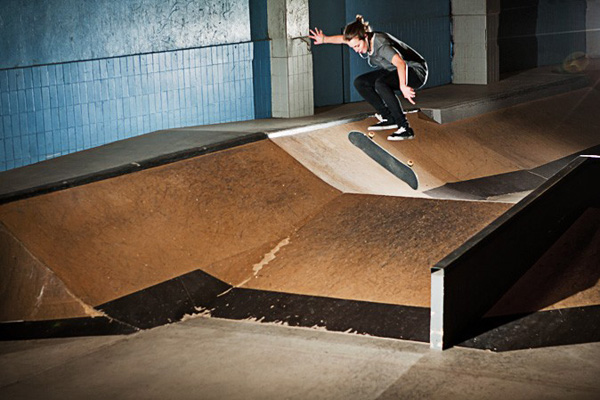 Well I’m a nerd so I read the newspaper or a book. I recently read a book about coffee. I’m a big fan of coffee! I nerd out Quentin Tarantino or Sofia Coppola movies, nerd out music, play guitar or take photos. I even bake, and not cake, I actually make bread.

I don’t really have a typical day. I finished high school recently and now I’m kind of taking a year off where I’m just working, which is great. I’m a substitute in a kindergarten and I also work at Cph Skatepark. If I’m not at work or doing some of the nerdy things listed above I’m just skating.

Copenhagen is my favorite skate city. It beats Barcelona. Or in summertime it does. Days where I get on my bike and go to all the different spots around the city are the best. But really there is nothing better than waking up on a sunny day taking my board and cruising down the street just outside my apartment. That’s all I need for a good session.

I like the social aspect of contests. It’s cool to get to meet new people through contests and skateboarding, but I always get stressed and put too much pressure on myself. It’s weird being judged, I don’t really like it. I don’t get how you can win and loose at skateboarding. 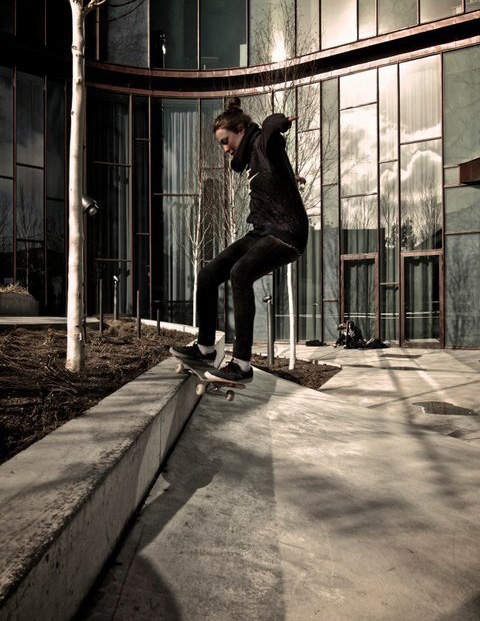 Not as many places as I wish! Yet. But I’ve been to most of Europe and Barcelona is probably my second favorite city besides Copenhagen, it’s like it was built for skateboarding! There’s a great vibe there, spots are everywhere and people are always so friendly. Berlin is great too.

Japan. I really wanna learn more about their culture, it seems so different from Western culture. I think my interest, some would say addiction, comes from watching Kill Bill and Lost in Translation. Those movies totally opened my eyes to Japanese culture. I can watch them over and over again. Sometimes before a session I listen to the songs used for the fight scenes in Kill Bill and get hyped as hell haha. There is just something about that country, it can’t be explained. I also love Japanese animation movies like Spirited Away and My Neighbor Totoro, they are so sweet. God, I’m such a nerd.

Depends on what mood I’m in, but I’m mostly into indie rock both the newer stuff and the early indie music from the 70’s and 80’s. Right now I’m listening a lot to Joy Division, Sonic Youth, New Order, The Velvet Underground & Nico and a couple of Danish bands like The Raveonettes and Mew. But I like whatever music that has a nice beat and good lyrics.

I have different sized feet. It’s not a huge difference, but enough for me to notice it. Makes shoes kind of complicated.

When I got back on the board a few years ago after having like 1½ maybe even 2 years break and I realized how much I had missed it. That was a highlight for sure. Besides that this year has been amazing this far. I’ve gotten to skate pretty much everyday and moved to Copenhagen where all it all happens.

Not much, just living I guess. Planning on going to The States this spring on a skate roadtrip down the West Coast, looking forward to that. I also wanna do a Scandinavian Tour, but haven’t really planned that out yet. We’ll see what happens.

Thanks to family and friends for always supporting me. Thanks a lot to dad and grandpa for building a skatepark in the barn. Thanks to Cph Skatepark and the guys working there for making it feel like home to me and probably a lot of other skaters too. Thanks to the people around me who inspires me. I thank all of you for not being assholes and proving that inspiration can be found just around the corner.