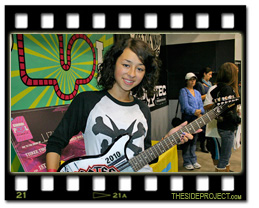 My little brother wanted to go to the local skatepark and learn to skateboard, so I decided to try it to. I progressed way faster then him, and then he chipped his tooth. He quit after that, but now he’s trying bmx.

My very first board, my dad bought me, from Toys R’ Us. It was a teenage mutant ninja turtles fake skateboard. My First real board was an Element with Ventures, and I dont remember what wheels or bearings it had.

I would have to save Pat Ngoho influenced me significantly. He’s really fun to skate with.

The best thing about Santa Monica is how diverse it is and the worst thing is how gross the bay can be.

I like to hang out with my best friends and go adventuring. I really like cooking, cause food is amazing.

My all-time favorite place to skate is the combi. Ever since it has been redone, it feels next to perfect.

Ugh, this list will never end. A partial list would include: Allysha Bergado, Sky Siljeg, Chrissy Russell, Josh Nelson, the Pinerios,…. and all other people who rip :]

It depends on what I feel like. Usually I’ll get one song stuck in my head for a week. I like a wide variety of music but currently We’re Going to be friend by Jack Johnson is stuck in my head.

One was when I learned feeble fakie in the deep end at the Cove, I did it because I forgot to bail. Another was all the times I’ve got to travel because of it. Most of all though, is meeting all the people I’ve met and becoming friends with the people I looked up to.

I’m still figuring it out, last year I had a goal to do all the WCS contests and do decently. I exceeded that, so its making goal finding much more challenging.

First and foremost I thank my family, for supporting and encouraging me. Then my sponsors because without them I couldn’t afford to do what I love. Next, all of my friends, like my best friends Kenzii Graves, Allysha Bergado, Chrissy Russell, and Kyle Chong. Also Sky Siljeg cause he’s my weirdo. Thanks to World Cup Skate and everybody that runs it cause with out them, I wouldn’t push myself as much as I do. And last but not least, everybody at the Cove, Skatepark.